The Sacred Ibis (Threskiornis aethiopicus) is a member of the ibis and spoonbill family (Threskiornithidae). Birds in this family are wading birds with long, downward-curved bills that they use to probe in mud or grass for invertebrates and other prey. Sacred Ibises are larger than Florida's native ibises.

They have very distinctive long, black feathers or plumes on their rumps. During the breeding season the feathers on the sides of their chests and on the outer wings (near the edge when folded) may have a yellowish (or reddish) tinge, and their lower legs may be tinged with reddish-copper; bare patches of scarlet-red skin may also be visible under their wings. The heads and necks of young Sacred Ibises are covered with black and white feathers, giving the head and neck a mottled appearance.

Sacred Ibises look very similar to the native Wood Stork (Mycteria americana), a member of the stork family (Ciconiidae) that is federally listed as an endangered species.

Sacred Ibises are native to sub-Saharan Africa, the Middle East, and Madagascar; historically, they were also found in Egypt, where they are now extinct. These large birds are often depicted in Egyptian hieroglyphs as the earthly representation of the god Thoth (also shown as an ibis-headed man) and were considered sacred?hence the common name. They are very similar in appearance and so closely related to the Black-headed Ibis (T. melanocephalus) in South Asia and the Australian White Ibis (T. molucca) that many scientists consider the three a "superspecies," and some believe they may actually all be the same species. In their native range, they inhabit coastal estuaries, lagoons, marshes, and other inland wetlands such as flooded agricultural fields and urban retention ponds. 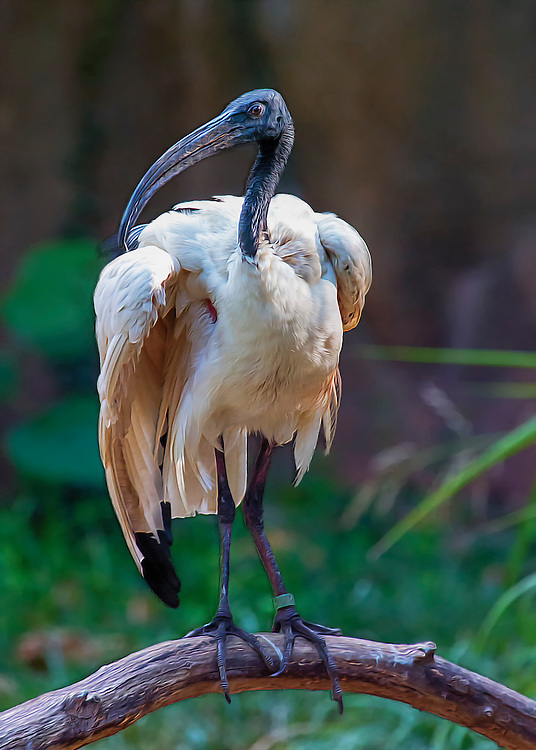