The East African Crowned Crane (Grey Crowned Crane) gets its name from the distinctive golden crown of feathers on its head. The Grey Crowned Crane is a bird in the crane family Gruidae. It occurs in dry savannah in Africa south of the Sahara, although it nests in somewhat wetter habitats.They can also be found in marshes. This photo was taken at the Saint Louis Zoo

This species and the closely related Black Crowned Crane are the only cranes that can roost in trees, because of a long hind toe that can grasp branches. This habit, amongst other things, is a reason why the relatively small Balearica cranes are believed to closely resemble the ancestral members of the Gruidae.

The body of the Grey Crowned Crane is mainly gray. The wings are predominantly white, but contain feathers with colors ranging from white to brown to gold. The head is topped with a crown of stiff golden feathers. Cheek patches are white, and a red gular sack is present under the chin. The gular sack is similar to a wattle, except that it can be inflated. Legs and toes are black. The bill is short and dark gray.

West African crowned cranes are monogamous birds that form pairs for life. Pairs can be seen together even in the middle of a large flock, which suggests an exceptionally strong pair bond. Adult cranes reinforce their pair bond by dancing for and with each other. They perform ritualistic dance displays that include bows, leaps, runs, wing flapping, short flights, jerky bouncing, running, and stick tossing. Cranes of all ages dance. Among younger birds, dancing may serve to reduce aggression with other cranes, provide physical exercise, and possibly relieve anxiety. 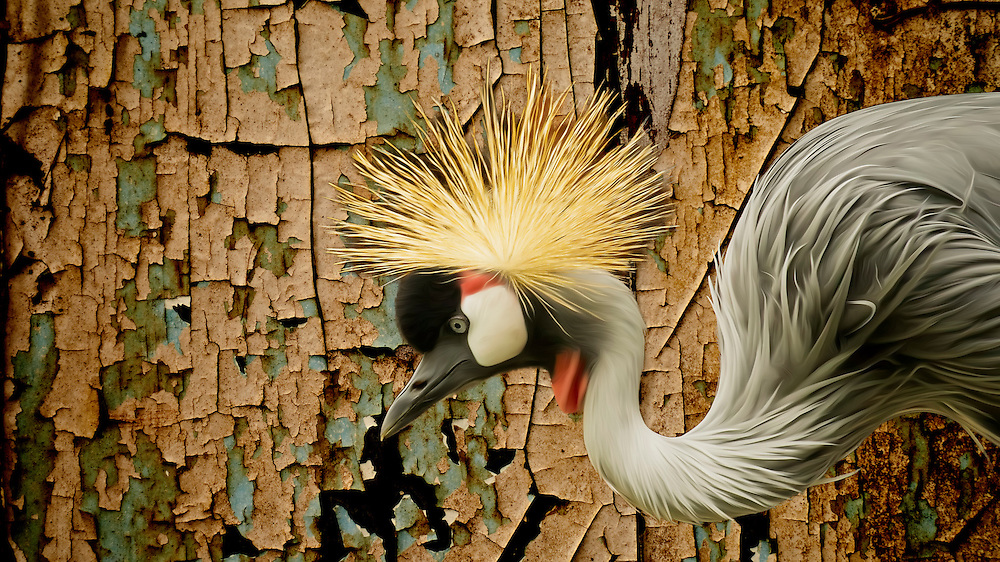